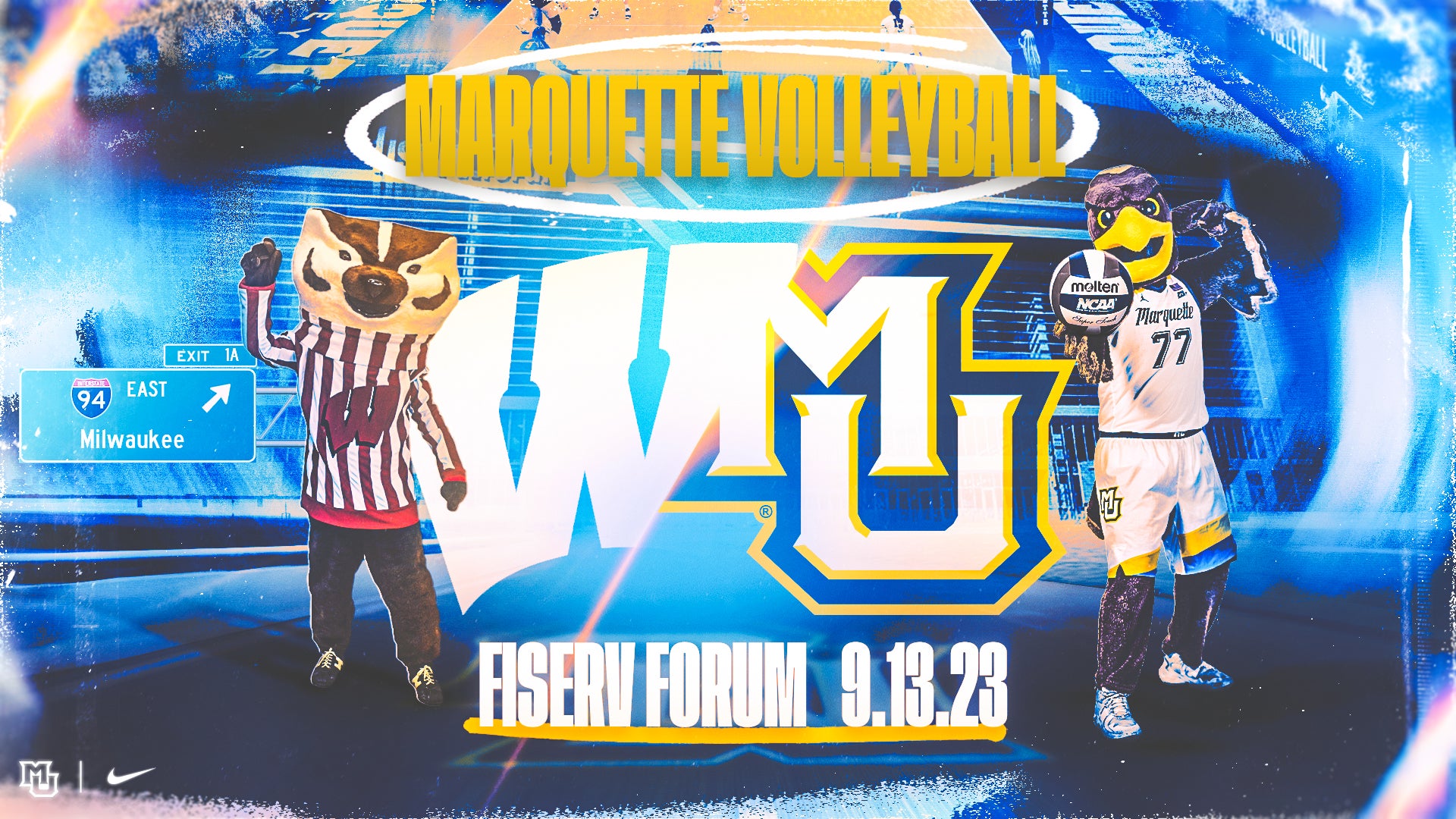 Marquette Volleyball to host Wisconsin at Fiserv Forum in 2023

MILWAUKEE (Dec. 3, 2022) – Fiserv Forum will host NCAA Division I Women’s Volleyball for the first time on Sept. 13, 2023, when nationally ranked programs from Marquette University and the University of Wisconsin meet in downtown Milwaukee.

Tickets for the match at the home of Marquette men’s basketball and the NBA’s Milwaukee Bucks will go on sale in the summer of 2023.

"We are thrilled to host NCAA Division I Women's Volleyball next fall for the first time," said Peter Feigin, President of the Milwaukee Bucks and Fiserv Forum. "Marquette and Wisconsin are having outstanding seasons and their interstate rivalry will generate an exciting match next year."

Both volleyball programs are currently ranked in the top-16 of the AVCA Coaches’ Poll, and each earned the opportunity to host home matches in the first and second rounds of the NCAA tournament this week. The two perennial NCAA participants each won league titles this fall, and the Badgers captured a national championship in 2021.

In addition to men’s basketball games at Fiserv Forum, the building partnered with Marquette to host the 2022 NCAA Men’s Basketball Championship, while Wisconsin men’s hockey played in the building’s inaugural Kwik Trip Holiday Face-off last winter and will again on Dec. 28-29.

WHAT THEY ARE SAYING:

“We jumped at this opportunity to elevate the sport of volleyball in the state of Wisconsin and highlight two programs with Final Four aspirations. It is an opportunity to showcase the volleyball community in the state and the amazing support our two programs receive. Hopefully one day we’ll be able to host a Final Four ourselves at Fiserv Forum.”

“We are excited and looking forward to playing Marquette in Fiserv Forum next year. Last year, not only did the Badgers win the Division I National Championship, but we also celebrated as UW-Eau Claire won the D3 National Championship. This year, Marquette and Wisconsin have both earned top-16 seeds in the NCAA tournament and both teams have enjoyed record crowds in recent seasons. In addition, the club and high school volleyball participation numbers in the state are also in the midst of an explosion. The sport has never been better than it is right now, and we are excited to continue this great rivalry and move it into bigger venues where more fans can experience watching the match in person. Earlier this season, Wisconsin set the all-time NCAA Volleyball attendance record in a sold-out and packed Kohl Center. We are looking forward to breaking that record in a sold-out Fiserv Forum.”

“What better way to highlight the incredible volleyball being played in this state than by packing Fiserv Forum. We are excited for the opportunity to showcase two elite NCAA Division I programs, with some of the best volleyball players from the state of Wisconsin. Volleyball has seen a remarkable rise in youth participation and broadcast ratings in recent years and we expect a great turnout and tremendous atmosphere at Fiserv Forum.”

“This is an exciting announcement and I’m thrilled that our volleyball team will have the opportunity to play in such a terrific venue. We are always seeking impactful experiences for our student-athletes and this promises to be a special event. We know the Milwaukee community loves the Badgers and I can’t wait to see a packed house.”